Home Poker Guides When is the Best Time to Raise in Online Poker?

When is the Best Time to Raise in Online Poker? 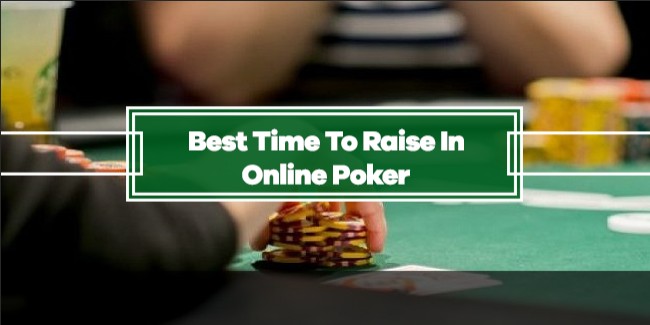 The art of online poker is truly skillful, but there are ways in which you can improve your game, and that can be done by practice and learning.

Below you’ll find all you need to know about when the best time is to raise in online poker.

First and foremost you should know your position within the betting circle. This will help you understand your betting position in comparison to your opponents.

It’s often considered to be a weaker position if you’re within the first few players placing your bets, while a player betting towards the end has had a full view of how everyone is betting to get a clearer understanding of the cards they may be holding.

You generally expect to make more money the later you are in the betting, which can help determine whether it is the right time to raise, fold or call.

Knowing When to Raise

If you are among the later players then it can be a good time to raise in poker. This can be done in a number of ways. You may want to use the bluff to mop up blinds of unconfident players in the early and middle positions in the betting round, while you can also bet strongly if you have a good hand, for example, a pair of Aces.

This may scare off opponents but could also draw in players, which is when you need to really start to think about the range an opponent may be holding.

Post-flop there are also a number of instances when it might be the right time to raise. This is most effectively done when the late player bets high among a sea of calls or low raises. Ultimately at this point, you need to be confident you can out bet your opponents. At this point, conservative players will generally fold. It’s important to be strong at this point, as a small raise may encourage players to continue into the river.

Aggression Can Be Key

It can be of course be useful to air on the side of caution when it comes to raising, and generally speaking, you won’t be aggressive with your raise every time you play.

It’s only certain instances where it can become an incredibly useful factor and a great time to raise. There is a benefit to playing aggressive though, which are:

When you’re in an early position, it can be a good idea to sit out hands and simply watch the action and get an understanding of how players are betting. This will then give you even firmer insight on the best times to raise and the best times to be aggressive.

If you’re thinking about this strategy, why not head to the many free poker rooms available online and start practicing this technique before playing with your own bankroll.