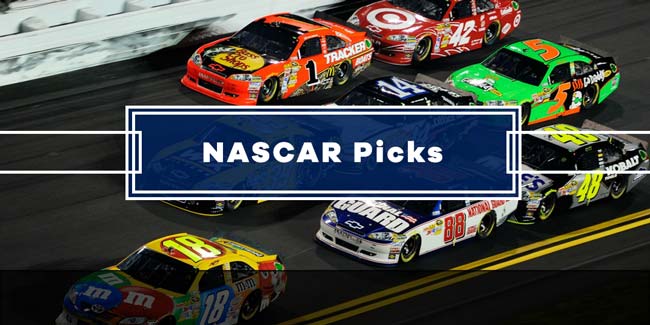 NASCAR returns to Darlington Raceway for the first event of the 2020 Playoffs – the Cook Out Southern 500. Looking for researched NASCAR picks on Sunday’s race? Our expert share out NASCAR betting tips every week, giving you the best chance to bash the bookies!

NASCAR returns for the third time at Darlington this season. A lineup of 39 drivers will be on the track for the 2020 Cook Out Southern 500 although only 16 are in the 2020 NASCAR playoffs.
All 16 drivers will be looking to survive into the next round of the playoffs. There are four rounds in the sport’s postseason as the field narrows from 16 to 12 to 8 and eventually the Championship 4.

Now, the major issue is the track is going to have very different weather conditions than what it had in May. This time the weather is projected to be unseasonably cool with the green flag dropping at 7:30 p.m. ET at Darlington Raceway.

Denny Hamlin finished 5th and 1st in the Darlington doubleheader this year. In 16 career races at this track, he has three finishes outside of the Top 10 and has never crashed out.

Erik Jones boast an impressive record at Darlington. He finished fifth in his first attempt, and In four races since, he hasn’t been worse than eighth. His victory in the 2019 Southern 500 proved he could win on rough surface tracks.

Kurt Busch recorded 14 top-10 finishes and four top-five performances this year. He’s had plenty of success at Darlington as well, finishing 7th or better in five of his last seven races, including a strong-third place finish at this track earlier this season

Alex Bowman has been quite good all season long. He ended the regular season eighth in the overall table with four stage wins. He warmed up for the playoffs with a fifth place at Drydene 311 and 7th place at the Coke Zero Sugar 400.

Austin Dillon earned a berth in the playoffs with a win at Texas and sits 10th in the standings. At Darlington, he does have one Top 5 and two Top 10s in eight career starts.

The National Association for Stock Car Auto Racing, conveniently known as NASCAR, is the second largest spectator sport in terms of viewers in the USA (second only to the NFL).

NASCAR fields three “national” touring series, the third-tier trucks series and a second-tier stock car circuit, all of which can be bet in the same manner. Anyway, the most important one is the Monster Energy NASCAR Cup Series, which boasts drivers such as multi-time champion Jimmie Johnson, Martin Truex Jr and Kevin Harvick. The season always start with the Daytona 500 in March.

With 36 regular season races, the Cup series provides one of the longest continuous betting opportunities in sports. And… on any given Sunday there are 43 drivers who have a legitimate shot at winning the race.

There are four main types of bets you can place on NASCAR and they are commonly offered by: outrights (or futures), head-to-head driver matchups, group matchups and prop bets.

Outright NASCAR betting works similar to other sports outright bets, as you need to pick the driver you think can beat out the rest of the field.

These are matchup bets on qualifying or races. A qualifying head-to-head bet is a bet on which of two drivers will qualify in a higher starting position than the other. A  matchup bet on a NASCAR race will result in you betting on which driver you think will have a better finish at the end of the race.

This type of bet combines both futures and head-to-head matchups into one wager. The sportsbook usually group three or four drivers in a pool and the goal for bettors is to pick which of those driver will have the highest finish in that race.

Prop bets are an individual action that may or may not happen in the race.

Eg. Which car manufacturer will win the race? Which driver is going to have the single fastest lap from the race?

There are other very interesting NASCAR betting options, and quite a few that can be very profitable as well.

The race winner, second-place finisher and a third car selected at random will be inspected at the track immediately following the race. Within an estimated 90 minutes, officials will be able to determine the legality of these three racecars.

How The Points Are Distributed in NASCAR

NASCAR will award points to the top-10 drivers (on a 10-to-1 scale) at the end of each of the first two stages. The winner of each stage will also receive a “Playoff Bonus Point”.

Points are accumulated over each of the 36 races. There is a reset for the 16 drivers in the playoffs after the regular-season finale at Indianapolis, the series’ 26th race of the season. There are additional points resets in the postseason after the completion of each three-race postseason round.

The playoffs will remain divided into three three-race rounds, with four drivers eliminated after each round to set up four finalists for the season finale at Homestead-Miami Speedway.

Playoff points are added to a championship-contending driver’s reset points total at the start of every round of the Playoffs until they are eliminated from championship contention.

At Homestead-Miami, playoff points are off the table and the Championship 4 drivers enter the “winner-take-all” race on equal ground.

Where To Find The Best NASCAR Bookmakers

We make sure we bring you the very best bookmakers for betting on soccer including all the biggest names worldwide.

You’ll receive odds from the likes of Caesars, 888sport and Fanduel as well as the emerging names popping up right across the US.

In our previews we only deliver you the best value odds and will combine great offers with these from our favorite bookies.

We really don’t miss a trick so keep your eyes right here for all the best sportsbook odds and offers today.