After a seven-month delay from its normal April date, and 19 months since Tiger Woods won the event to claim his fifth green jacket and 15th major championship, the best in the world return to Augusta National! Are you ready for 2020 US Masters? Let’s take a look at our experts’ picks and predictions on the most anticipated golf tournament ever!

The Masters tournament begins Thursday, Nov. 12, at Augusta National Golf Club (Georgia), roughly seven months after it was supposed to be played because of the coronavirus pandemic.

This will be the first time that Augusta is being contested outside of April and a big factor this week may be the weather.

Who will win the US Masters?

Are you wondering what does it take to win the Masters? As for the actual type of game it takes to win, the tournament tends to favor longer hitters. Driving distance will be even more important this time, particularly if the course is softer in the fall edition of the Masters.

The sloping, speedy greens and run-off areas create very small landing spots that will give a golfer a chance at birdie. Hence, golfers with good stats in Strokes Gained: Approach will have an edge over competitors.

Lag putting will be extremely important as well as course history – the Masters champion has generally shown some good form at Augusta in the past.

Bet $1, Win $100 with BetMGM if Any Golfer Makes a Birdie! Paid in free bets. Available in all states (NJ, CO, IN, TN and WV). Click here to claim this offer! 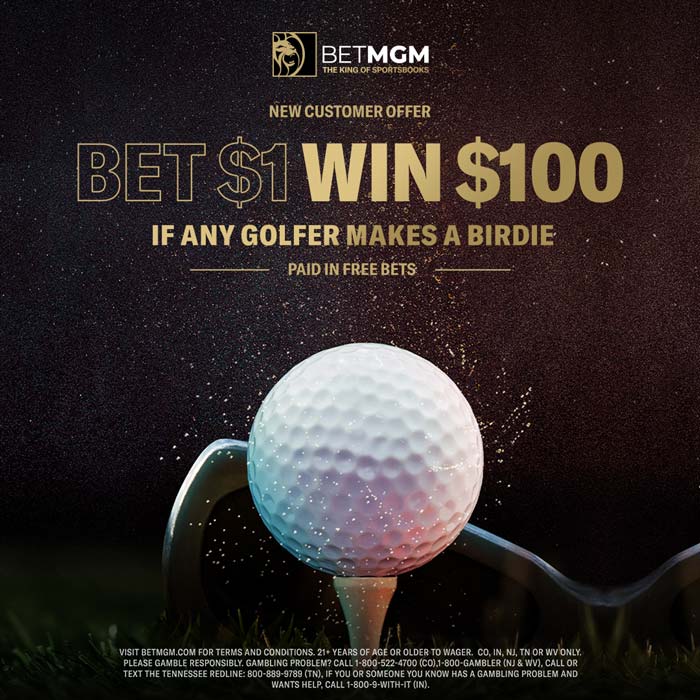 Bryson DeChambeau is the pre-event favourite after his demolition job in the US Open a couple of months ago. He hits it farther than anyone, and he hits it higher than anyone. And he’s even threatening to debut his new 48inch driver which he’s been carrying over 400 yards with in preparation. Hence, it’s very possible he completely steamrolls the course and wins it going away like he did for the US Open earlier this season.

Dustin Johnson is playing at a different level this year though and looked fine off a short Covid-19 break in Houston where he ranked 2nd in SG: Tee to Green play and finished T2, overall. With recent Augusta figures reading 6-3-10-2 and current form figures reading 2-1-2-1-6-2, he should be at the head of the market.

Jon Rahm racked up two wins since the golf season resumed, and also finished a close second in his final warm-up event (the Zozo Championship). The Spaniard will be making his fourth appearance at Augusta this week and his last two visits to the course have produced a T4 in 2019 and T9 last year.

Patrick Cantlay briefly held the final-round lead on the back nine last year before fading to tied ninth. He is high on confidence after an impressive victory at the ZOZO Championship on his most recent start.

Bubba Watson is a two-time winner here at Augusta and enters the tournament on the back of a fourth place at the Zozo Championship and seventh place at the CJ Cup. He finished tied for fifth and 12th over the last two US Masters.

Patrick Reed also impressed at the recent Zozo Championship and crucially has the experience of having already won at Augusta. Reed won the World Golf Championship title in Mexico at the sart of the year and looked the likely winner midway through the third round of the US Open, before suffering a meltdown. 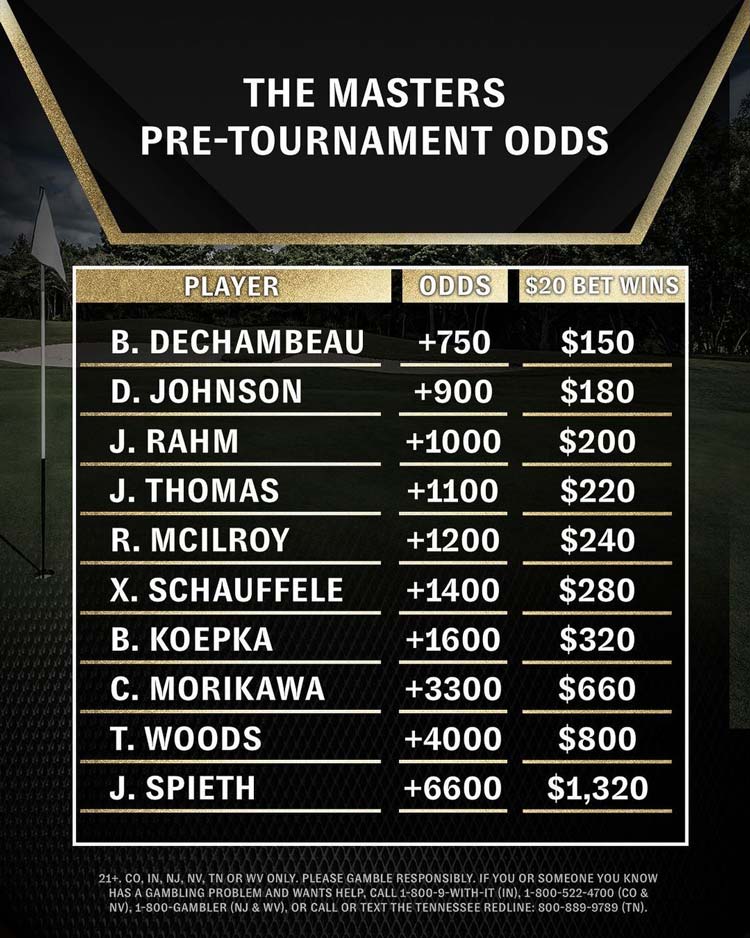 Louis Oosthuizen has been very solid all year with four top 10s from 16 events. He started fast at the US Open with a 67 before finishing third. The South African has finished inside the top 30 at Augusta in five of the last six years, as well as a second place finish in 2012. He definetely can’t be overlooked in Majors.

Hideki Matsuyama arrives at the Masters after his tied second place in Houston last week.

The defending champion is Tiger Woods but his form is far from inspiring – he has failed to even crack the top-20 in six starts since June. Of course, you can never write him off here at Augusta.

Matthew Wolff is the rising star. The 21 years old has already finished in the top-five in both his major appearances so far.

Tyrrell Hatton disappointed at he US Open but then won the BMW PGA Championship at Wentworth by four strokes and he headed back across the Atlantic to finish in a tie for third at the CJ Cup. Another top-10 finish followed at the Houston Open on Sunday, so he could definitely be in the mix on Sunday.

Xander Schauffele has had just two tries at the Masters but made a huge jump from his debut tied 50th when finishing joint-runner-up last year.

Jason Kokrak followed up his CJ Cup triumph with a T17 in the Zozo Championship. His form at potentially correlating courses like Shadow Creek and Riviera bodes well and the odds are attracting.

Cameron Champ has shown encouraging signs with his iron play and putting last time out,m as he finished 8th in the Zozo. He finished that tournament with three rounds of 68 or lower. He sits fourth in driving distance on the PGA Tour in the early part of the 2020-21 season and we expect Champ to move his way up the leaderboard through his long-drive skills. 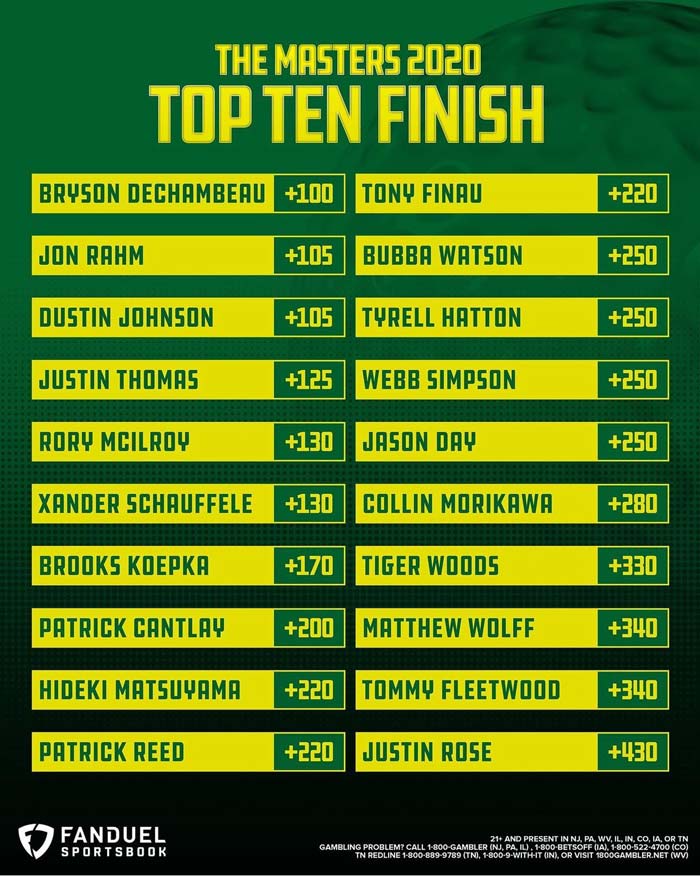 Our US Masters Picks

And now our golf experts share their 2020 US Masters picks. You will also find attached to each prediction the best odds available at the moment!

Looking for more bets? We got you covered! Our experts recommend the following bets: