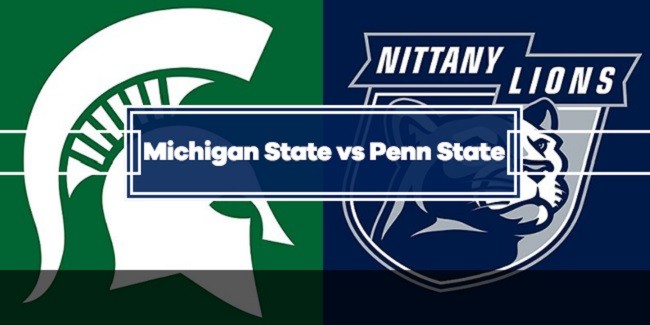 The Michigan State Spartans will battle the Penn State Nittany Lions in this Big Ten East Division showdown. The Spartans are coming off one of their worst defensive efforts and they will try to finish the season with a win. The Nittany Lions have won two games in a row and they were double digit wins. Who will win this game? Read our Michigan State vs Penn State picks, find the best odds, lines, free bets, and legal US Sportsbooks where to place your bets!

When Michigan State vs Penn State?

Michigan State is fifth in the Big Ten East Division, 2-4 overall, and 2-4 ATS. The offense ranks towards the bottom in a lot of key areas. The team is decent in the passing game. They score around 17 points per game. The defense is average and they are good at stopping the big yardage plays from time to time. They give up around 34 points. Their four losses this season were double digit ones and they had two close wins.

Last week, Michigan State lost to #4 Ohio State 52-12. The game was done by halftime and they were able to get some points in the second half. They had a couple of productive receivers, but that’s all that they had going for them. The Spartans need to limit the turnovers and penalties, and get a consistent offense going.

Penn State is sixth in the Big Ten East Division, 2-5 overall, and 2-5 ATS. The offense is good at taking their time on each possession and average in all the other main offensive areas. They score around 25 points per game. The defense is above average and the passing defense is their best statistic. They give up around 29 points per game. This team has had three double digit losses and the rest were solid games.

Last week, Penn State beat Rutgers 23-7. The Nittany Lions controlled the game from start to finish and scored in every quarter. Quarterback Sean Clifford went 15 of 22, for 133 yards, 1 touchdown, and 1 interception. This game was all about the rushing offense and the rushing defense.

This will be the 35th all-time meeting between the Spartans and the Nittany Lions. Michigan State leads the series with a 17-16-1 record. In the last ten games, the Spartans are 6-4 and 6-4 ATS. The over/under is 7-3. Michigan State scores around 25 points per game and Penn State is at 28. The Nittany Lions have the edge in rushing, passing, and total yards. The Spartans have the better completion percentage. MSU is 2-1 in the last three games against PSU.

These two below average teams will try to end their seasons on a high note. Michigan State has played four tough teams in a row and they somehow managed to score 29 points against Northwestern. This team can pick up the turnovers, but they can also be sloppy with the ball on their end. The Spartans offense will try to get the passing game going early work on their third down efficiency.

After losing all season, the Nittany Lions have a two-game winning streak going, and the defense is starting to play better. Sure, the wins were against other below average teams, but a win is a win, and that can slowly build the confidence up. Penn State will do what Michigan State can’t do well and that is run the ball, control the time of possession, and let the defense do the rest. The Nittany Lions win 30-17, but don’t cover the spread.