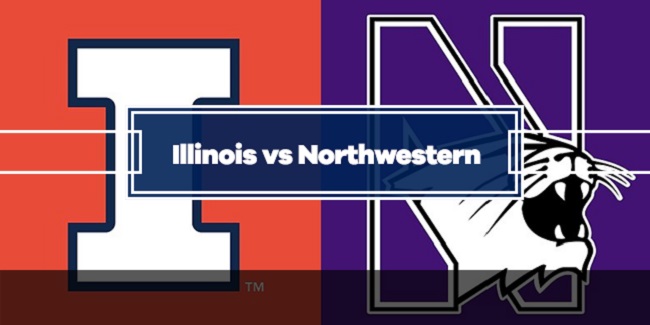 The Illinois Fighting Illini will battle the #14 Northwestern Wildcats in this Big Ten West Division showdown. The Fighting Illini have won two of their last three games and will look to make Northwestern sweat a bit. The Wildcats will try to get back in the win column and hold their first-place spot in the Big Ten West Division. Who will win this game? Read our Illinois vs Northwestern picks, find the best odds, lines, free bets, and legal US Sportsbooks where to place your bets!

When Illinois vs Northwestern?

Illinois is last in the Big Ten West Division, 2-4 overall, and 3-3 ATS. The offense is below average, but they are 24th in the league in rushing. They score around 22 points per game. The defense is towards the backend of the league rankings. The team is okay with limiting the number of plays that happen against them. They give up around 32 points per game. This team has only been blown out twice and in the other games, they gave a decent effort.

Last week, Illinois lost to #19 Iowa 35-21. Illinois was up one at halftime, but just couldn’t keep up in the second half. They had strong rushing depth and the wide receivers came through to finish nice drives. The team matched with Iowa in a lot of areas and simply just wasn’t productive enough on their yards per play.

Northwestern is first in the Big Ten West Division, 5-1 overall, and 4-1-1 ATS. The offense is okay and the team is good at staying on the field for awhile, and stacking up the total number of plays. The team scores around 25 points per game. The defense has carried the team. They rank in the top 35 in passing and rushing defense. This team is great at not giving up the big plays. They give up around 15 points per game. Northwestern has been in a lot of low scoring games this season and they just lost their first game of the season.

It happened two weeks ago, and it was a 29-20 defeat, at the hands of Michigan State. The Wildcats fell behind early and they couldn’t recover from it. Quarterback Peyton Ramsey went 21 of 43, for 210 yards, and 2 interceptions. The lack of rushing yards and the 4 turnovers were the keys to the loss.

This will be the 114th all-time meeting between the Fighting Illini and the Wildcats. Illinois leads the series with a 55-53-5 record. In the last ten games, the Wildcats are 7-3 and 6-4 ATS. The over/under is 7-2-1. Northwestern scores around 34 points and Illinois is at 25. The Wildcats have the edge in rushing and total yards. The Fighting Illini have the edge in passing yards. Northwestern has a current five game winning streak over Illinois.

Our Illinois vs Northwestern Picks & Predictions

As you can see by the all-time record, these two clubs play evenly matched football games. The Fighting Illini score just as much as the Wildcats do. Illinois just played a solid game against Iowa and they will look to bring those good vibes into this game. Northwestern just had a sloppy game against Michigan State and their offense will look to bounce back. The Fighting Illini will rush better than Northwestern, but the Wildcats defense will be the main theme of this game.

Also, Northwestern needs to finish the season strong and they won’t be messing around. Illinois will give them a strong effort in the first half, but the Wildcats will slowly break away in the second half. Northwestern wins 20-10, but doesn’t cover the spread.