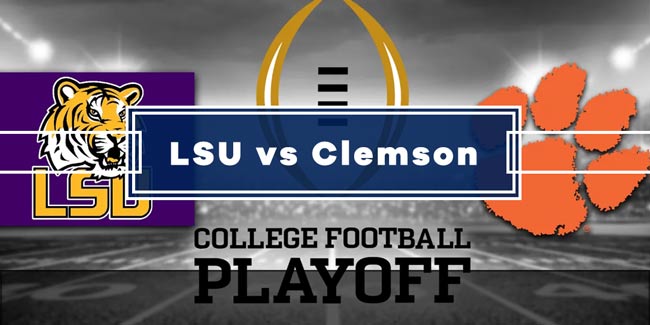 LSU and Clemson lock horns for the 2020 College Football Playoff National Championship at 8 p.m. ET on Monday, Jan. 13, in New Orleans. Who will wear the crown in 2020? Read here our LSU vs Clemson picks, including recommended bets, betting lines, odds and free bets for US bettors!

Clemson have the best defense in college football by far

Clemson have not lost in 29 straight games, and a quarterback in Trevor Lawrence that has not lost a game since high school. Ohio State had Clemson (14-0) dead to rights late in the fourth quarter, but the Clemson quarterback led his team to a memorable comeback courtesy of a game-winning touchdown drive. Clemson also has RB Travis Etienne, who has more than 1,500 rushing yards on the season. They are ranked No. 1 in the country in scoring defense with opponents averaging 11.3 points per game against them. This is just the second time Clemson has been an underdog the last two seasons: the last time that happened, Clemson beat Alabama 44-16.

LSU came into the playoff as the top seed and are now odds on favorites to win the Championship title. In the 63-28 drubbing of Oklahoma Sooners in the CFP semifinals, Joe Burrow went 29-for-39 for 493 yards and seven touchdowns. The LSU quarterback is aiming to join the short list of Heisman winners that won the national championship in the same season. That video game-like performance earned him the record for most passing touchdowns ever in a college playoff game. But it’s not all about the offense as Ed Orgeron has guided LSU through a tough schedule, including wins over six top-10 teams

LSU vs Clemson Head To Head

LSU vs Clemson picks: Who will win?

This should be a classic. LSU has the best offense Clemson has faced, but Clemson also has the best defense LSU has faced—by a pretty wide margin.

There are few better ways to place college football bets than with a free bet and you’ll find a large range with our recommended bookmakers.

Head to our betting offers and free bets page to browse all the best available right now and start placing your college football bets!