There’s no denying the fact that Starburst Slot is one of NetEnt’s most sought after games online. Perhaps because it offers you a free of charge intergalactic trip to the universe where you’ll be searching for deep space wins! Your Science-Fiction mission, should you accept it, is to bag as many dazzlingly gemstones along with the paylines, which will help you scoop prizes of black hole proportions.

And while the allure of an intergalactic trip is mindboggling, there are few in-game features to accompany it as NetEnt has only included one outstanding feature in the game. Read on to discover how you can activate this feature and what you stand to gain once it’s active! 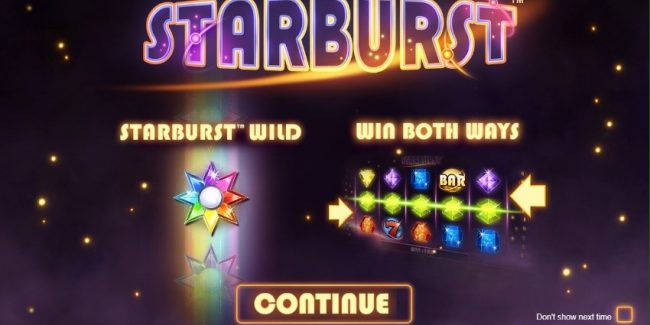 From glittering bonus games that have the potential of landing you winning combinations of symbols to graphics and animations that are out of this world. Starburst online slot has remained a firm favorite among casino players for ages – and for good reason only!

There’s a certain beauty to the simplicity of the game’s reels. With no bells and whistles attached to the game, the attention has been to offer you some high-quality gameplay, great winning opportunities, and most importantly, some fun to boot!

Behind the simplicity and ease of playing the game, there’s a remarkable ‘win-both-ways’ engine in the gameplay. This feature does what it says on the surface – enabling you to win both ways. This implies that you can land winning combinations from the leftmost side of the reel to the rightmost side of the reels and vice versa. This increases your chance of landing wins as you play Starburst slot.

Win-both-ways feature is difficult to come by in the online casino industry. So, when it does make an honorable appearance, Eurolotto players won’t fail to notice it, hence the reason why Starburst slot is very popular with players.

The Starburst Theme and Symbols

There are several aspects in Starburst that stand out and the theme is one of them. We like the star-filled night sky in the background as well as the celestial sci-fi music. If you lived through the 70s, you’ll also agree with us that the game looks similar to some of the opening credits of a 1970s TV show. Thanks to the dark background and spangly with stars.

As far as the symbols are concerned, they constitute a whole host of shiny jewel-planet icons, which come in emerald green, amber orange, topaz yellow, amethyst purple, and sapphire blue. These glittery symbols constitute the low-medium paying symbols and reward you as shown in the table below. Additionally, you’ll also come across the lucky number 7 symbol not forgetting to mention the good old’ fashioned bar symbol. These are the highest paying symbols in the game.

Okay, so there’s no bonus or scatter symbol in Starburst slot, which means no free spins and no bonus game. It’s a sad story, right?! Yes, it is! But on the brighter side, the game’s starburst wild feature makes up for this shortcoming by the bucket load. This feature is activated when you land the wild symbol on reels 2, 3, and 4. When they do, they’ll take over the entire screen. If you are lucky enough to land more wild symbols after the spin. Also, there’s a re-spin feature, which will keep going until there are no more wild symbols on the screen. Perfect! 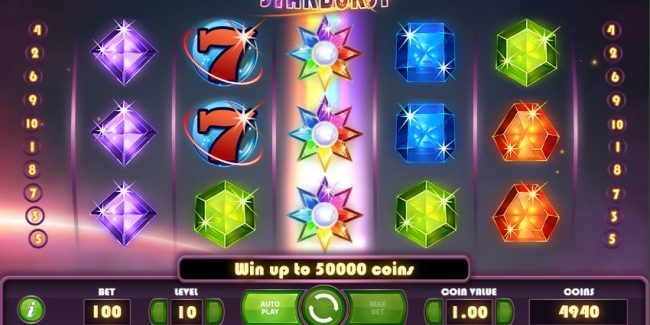 One of the most asked questions across multiple online casino forums is ‘The Best Way to Play NetEnt’s Starburst Online Slot’. Sure, you can easily use your laptop or desktop computer to play Starburst. But these platforms can occasionally be inconvenient and uncomfortable options. The latter option, for instance, is a relic of the past, as well as the downloadable casino platforms.

What we all want is something modern, fast, and enables us to enjoy playing our favorite games conveniently, and comfortably.  So, welcome to the mobile or smartphone friendly Starburst online slot.

What’s so special about this title? The most outstanding feature is the unparalleled flexibility that the game offers you. While playing the desktop version of the game, you’ll have to be confined to your PC. If you are using your laptop, you’ll slowly but surely cook your lap from the laptop’s hot components.

But when you choose to play this game on the move, you can conveniently and comfortably spin the reels wherever you wish to. You can spin the reels in the great outdoors, whilst on your couch, or whilst relaxing in bet.

How to Play Starburst Slot?

Starburst slot uses a 5 reel, 3 rows, and 10 payline configurations. Some may view the 10 paylines as few, but when you consider the fact that you can form wins, either way, you’ll see it’s not that bad! To play Starburst Slot, you’ll have to do as follows:

Use the Autoplay feature to set a pre-determined number of spins as well as the Max Bet button to set the highest possible bet in one tap!

Starburst is played for real money on both mobile and desktop devices. You can play Starburst at most of the legal online casinos:

As a low variance casino game, Starburst online slot undeniably has a huge fan base. By choosing to play this game, you can not only enjoy the entertaining nature, which comes with dazzling colors and precious rewarding gems, but also a high RTP of 96.09%. This means that as long as you have a feasible bankroll that doesn’t involve throwing around come cash aimlessly with each bet you make. Certainly, you should be in a position to survive an hour or two playing the game.

With only 10 paylines under its belt, Starburst online slot doesn’t have as many as Gonzo’s Quest or other NetEnt slot releases. But we believe the entertainment aspect of the game should be more than enough for you to play it. And with its 50,000-coin top prize, Starburst online slot definitely has the potential to gift the lucky player a life-changing amount of cash.