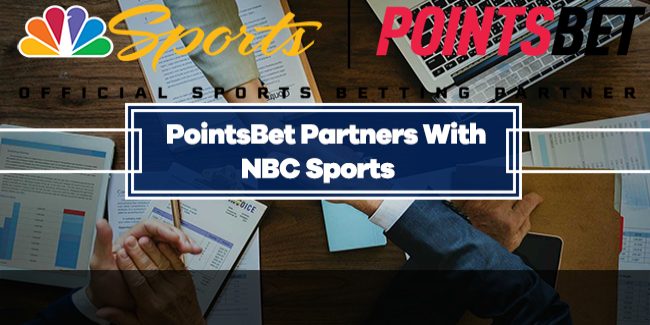 Late Thursday, the Australian based sportsbook – PointsBet had officially announced a multi-year exclusive partnership with American media giant, NBCUniversal. This deal isn’t the first of its kind, similar multi-year partnerships include CBS with William Hill and FOX with Stars Group.

PointsBet commits to spending $393 million in marketing. Whereas, NBC takes a 4.9% share of the company and an option to purchase up to 66m shares at the conclusion deal.

PointsBet will include in multiplatform gameday integrations across the eight NBC Sports Regional Networks. Those are the exclusive regional homes to NBA, MLB, and NHL teams delivering more than 2,200 live sporting events.

With this multi-year deal, PointsBet becomes an official partner of the NBC Sports Predictor app. Therefore, Predictor is going to include PointsBet content throughout its app, expanding the offering of games. Currently, the app has more than 1.1 million downloads. In fact, it is home to free-to-play games for sports like football, premier league soccer golf, and NASCAR.

David said “For NBCUniversal and PointsBet, this agreement provides considerable opportunities in the fast-growing sports betting marketplace. It is unique to this extensive and robust, multi-year arrangement. Looking ahead, we’re also excited about the significant activation opportunities that will come to fruition as sports betting continues to proliferate across the U.S.”

NEWS: PointsBet is now the official betting partner of @NBCSports.

This landmark deal provides us with premium media & marketing opportunities across all platforms, as well as varying gameday integrations across all NBC platforms!https://t.co/1tnKK2R7lH

PointsBet will be the exclusive provider of odds, props, and trends for NBCSN, Peacock (NBCUniversal’s new streaming service), Golf Channel including their digital properties, and NBC Sports Podcasts. Also, exclusive PointsBet odds integrations will be incorporated into Rotoworld.

The NBC Sports Group possess a huge collection of media rights agreements, partnering with some of the most prestigious sports properties in the world including the International Olympic Committee and United States Olympic and Paralympic Committee, the NFL, NHL, NASCAR, INDYCAR, PGA TOUR, The R&A, PGA of America, USGA, Churchill Downs, Premier League, Tour de France, French Open, and many more.

PointsBet Sportsbook in the US

The Australian based sportsbook, PointsBet was launched in the US in January 2019. It is one of the fastest-growing in the US with expanding its footprint to multiple states within a year. PointsBet initially launched in New Jersey before expanding to Iowa, Indiana, and Colorado.

Being a cutting-edge sportsbook operator, PointsBet prides itself on having the quickest and most user-friendly iOS and Android app. It provides the best content and experience for sports bettors.

PointsBet sportsbook offers various promotions including boosted odds, early cash-out, and loyalty programs. It also offers a unique and innovative way to bet – PointsBetting, where the more you’re right, the more you win.