On Saturday, June 12, middleweight champion Israel Adesanya will fight the challenger Marvin Vettori in the main event of UFC 263 inside the Gila River Arena in Glendale, Arizona. For this special event, FanDuel sportsbook is welcoming new customers with its special 30/1 Odds Boost on either Adesanya or Vettori to win the fight.

Simply place a $5 bet on Adesanya or Vettori to win the Middleweight Championship, sit back, and enjoy the fight. You’ll win $150 if your chosen fighter pulls out the victory.

Certainly, this is incredible value for bettors no matter the fighter. Adesanya, aka The Last Stylebender, is a significant favorite (odds -290) to win this match over Vettori (+225). However, these regular odds doesn’t matter as both both fighters can get a massive +3000 odds boost with this promo. 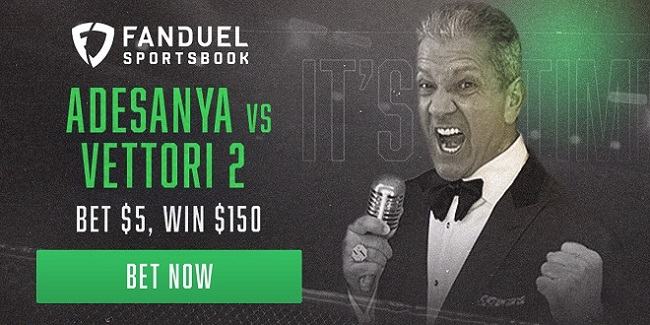 The FanDuel UFC 263 odds boost is one of the best new-user promo with an extremely low risk proposition. All it takes is a $5 bet to potentially win $150. This promotion is exclusive to new FanDuel users who are present in all states where FanDuel sportsbook is live except Illinois.

FanDuel UFC 263 Odds Boost is an app-only promotion, so desktop users must download the app after registration to claim the offer. The promotion is now live and will end at 11:59 PM ET on June 12, 2021.

Here is how you can claim this offer:

FanDuel sportsbook settles the bet within 72 hours of the fight’s conclusion. You can use the free bets to place any sports bet on the FanDuel sports betting app.

Who are eligible to participate?

The Promotion is open to new individuals who are at least 21 years of age. Must possess a new FanDuel account and are physically present in states where the sportsbook is live except Illinois. At the present time, FanDuel online sportsbook is available in New Jersey, Pennsylvania, Indiana, West Virginia, Colorado, Iowa, Tennessee, Illinois, Virginia, and Michigan. Meaning, this offer is redeemable in any of the above states.

The eligible wager must be the player’s first FanDuel sportsbook wager placed on the new FanDuel account.

Must remember, the FanDuel UFC 263 Odds Boost promo replaces the regular $1000 risk-free bet bonus. Therefore, players who claim these boosted odds will not be eligible for any other acquisition specific offer.

UFC 263 goes down this Saturday inside the Gila River Arena in Glendale, Arizona at 10 p.m. EST. The main card is topped by a dynamite middleweight title fight between champion Israel Adesanya and challenger Marvin Vettori.

The pair met once before in April 2018 with Adesanya earning a split decision victory in this exact same arena. Adesanya will look to land solid inside leg kicks and inside uppercuts, like he did in the last fight. While Vittori will give a tough fight to this second bout with Adesanya.

Adesanya stopped the No.1 and No. 2 contenders –  Paulo Costa and Robert Whittaker in recent fights. On the other side, Vettori is on a five-match winning streak after losing to Adesanya in 2018. He is the third contender in the middleweight division and can’t be overlooked.

Who comes out on top when these two middleweight talents meet for the second time in the UFC 263 main event? As always, there’s no way to know for sure until fight night. As of now, many bets are placed on Adesanya, making him the favorite with -290 odds while Vettori is the underdog at +225. So, it will be a wise choice to pick Adesanya to win the fight with +3000 odds at FanDuel sportsbook.