The Coronavirus outbreak has thrown the majority of global industries into the sink, but online poker is one of the few exceptions. PokerStars PASCOOP coming early, aiming to kickstart on April 4 with a guarantee prize money of $2 million. It overlaps with NJSCOOP that starts on April 11. This the PokerStars’ debut flagship series in Pennsylvania under the PASCOOP brand. 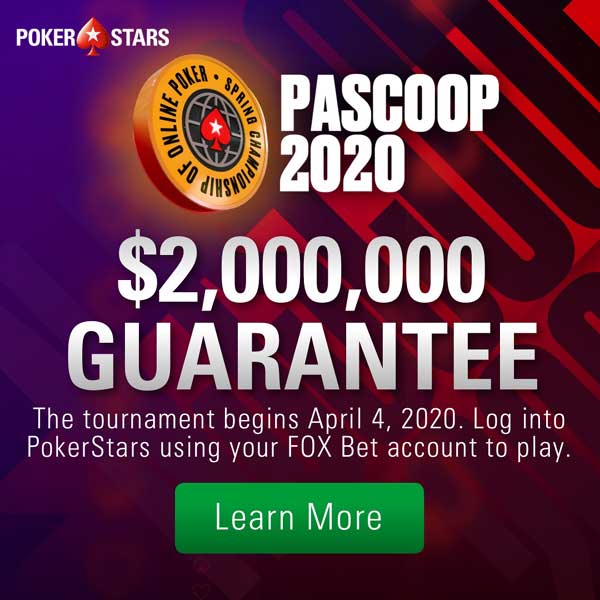 Usually, PokerStars runs its annual PASCOOP series each year during the second half of May. Due to the COVID-19 outbreak, the World Health Organization forced to close all casinos and poker rooms throughout the USA and around the World.

Therefore, all live tournaments series that are scheduled for the coming months are either canceled, postponed, or moved online.

As the live poker is unavailable, traffic at PokerStars PA has unsurprisingly increased in recent times. Under those circumstances, PokerStars decided to change the PASCOOP schedule and begin early. This is the first-time ever PASCOOP to start in April.

The 2020 PokerStars PASCOOP festival set a record total guarantee of $2 million. This is not a record for the US regulated market. As the honor belongs to the WSOP Online Championships, that guaranteed $3 million in 2018.

Interested to bet on lottery games? Playing lottery games is fun, but picking a winner is not easy. We recommend playing Pennsylvania 3 digit lottery, which requires you to select only 3 numbers. This gives you a much better chance of winning.

Over the years, PokerStars NJSCOOP typically ranges from mid-April to mid-May. This year, the tournament is ready to begin on April 11 and overlap with PASCOOP. At the present time, the number of events in the 2020 NJSCOOP tournament is still unconfirmed.

PokerStars is working on an ongoing experiment regarding hosting PASCOOP and NJSCOOP consecutively, then simultaneously. Both of them overlap this year because the PokerStars’ Spring festivals are typically stretched across 2 weeks.

New Jersey players have the opportunity to play the NJ online lottery. We bring you the best NJ Pick 3 Midday.

Unfortunately, due to the COVID-19 outbreak, PokerStars has canceled several upcoming live series for the next couple of months. Such as the Brazilian Series of Poker, EPT Sochi, and Pokerstars and Monte-Carlo Casino EPT.

There are a lot of cancelations happening locally as well. Until now, the Pennsylvania Gaming Control Board closed 12 land-based casinos in Pennsylvania.

In addition, Borgata/party announced a special ‘quarantine’ series online. Furthermore, Global Poker – a sweepstakes poker site has also made an expansion to its weekend schedule with additional satellites to its flagship events.

As a direct result of social-distancing measures, however, current traffic is up by a similar margin. This tends to increase more in the upcoming days.

Because the live poker is not available, online poker is in high demand. According to PokerScout, an online poker traffic site, on Feb. 17 there was a 24-hour peak of 813 players on PokerStars PA site with 446 cash game players.

Now, the stats increase rapidly. On March 17, there was a 24-hour peak of 1,181 players, including 691 cash game players. Meanwhile, there is an increase of more than 75% of players logged onto PokerStars PA during evening hours over the last 2 days.